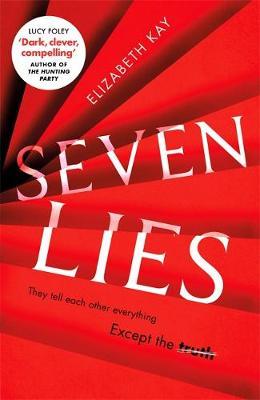 Kay, Elizabeth (2020) Seven Lies. Sphere. Jane and Marnie are best friends. They have been simpatico since they were eleven years old. They both fall in love and get married, but Jane’s marriage ends in tragedy, whilst Marnie is happily married to a man Jane hates. Charles is loud and obnoxious but when Jane gets the opportunity to tell Marnie how she feels, she lies. Its downhill from then on, lie following lie, with chilling consequences. A dark story of obsession and toxic friendship, told by an unreliable narrator who begs for our understanding throughout. Frantic page-turner. Rating: 8/10.

Shriver, Lionel (2020) The Motion of the Body Through Space. The Borough Press. Serenata has exercised on her own throughout her life, destroying her knees.  As she contemplates surgery her sedentary husband Remmington discovers exercise.  As he joins the fitness cult and seeks gruelling challenges Serenata is sure he will end up severely injured or dead. The obsession of a man in lycra drives the conflict in this novel. Stubbornly brilliant. Rating: 9/10.

Tyler, Anne (2020) Redhead by the Side of the Road. Knopf.  Micah is a self-employed techie who moonlights as his building’s supervisor. He is cautious and a creature of habit. Although he claims he is not unhappy his loneliness is palpable. One day his world goes totally off-kilter when his woman friend dumps him and an adolescent turns up on his doorstep claiming to be his son. An intimate story of a man who discovers the world is out of reach and the unspoken rules of his life are not enough. Warmhearted and tender little tale. Rating: 8.5/10.

Heffernan, Margaret (2020) Unchartered: How to Map the Future Together. Simon & Schuster. Our uncertainty about the future means that we are obsessed by prediction. Heffernan seeks to make us less daunted by uncertainty and to seize the day. We need to look to more powerful alternatives than planning, resist the false promises of technology and efficiency, and mine our own creativity and humanity. Once we accept that no one knows the future, future possibilities proliferate. Challenging. Rating: 8.5/10.

Collins, Suzanne (2020) The Ballad of Songbirds and Snakes. Scholastic. In this prequel to The Hunger Games trilogy we are introduced to eighteen-year-old Coriolanus Snow. The Capitol’s mighty Snow family has fallen on hard times. Coriolanus, the tyrannic antagonist in the trilogy, is just coming into his future as a mentor to a female tribute from District 12, in the tenth annual Hunger Games. As their fates become entwined he starts to have feelings for his doomed tribute. He must use all his charm and cunning so they both survive. Ambition drives him but a loss of humanity has its costs. Revelatory as an origin story. Rating: 8.5/10.

Sligar, Sara (2020) Take Me Apart. MCD/Farrar, Straus and Giroux. Ex-journalist Kate Aitken is hired to archive controversial photographer Miranda Brand’s personal effects. Kate has moved to the San Francisco Bay area to escape a harrowing incident that has ruined her career and mental health, however as she pieces together a portrait of the artist her obsessive tendencies come to the fore. Miranda’s death at 37 was deemed a suicide but questions and rumours persist. When Kate discovers Miranda’s diary she begins to unravel a life and work bound by the demands of fame, creativity, motherhood, madness, and domestic violence. Raw and atmospheric but could not relate to the protagonists.  Rating: 8/10.

Elliot, Kendra (2020) The Last Sister. Montlake. In the wake of the gruesome death of her father, the suicide of her mother, and her sister going missing, Emily is struggling to forget. Twenty years on she is once again caught up in a brutal double-murder with racial overtones. Emily calls in the FBI feeling the past and present crimes are connected. Two FBI officers arrive in the small rural Oregon town of Bartonville to investigate, setting up a romantic pairing for Emily.  Plenty of action and intersecting stories by a prolific romantic-thriller writer, but overall its muddled approach fails to deliver on promise.  Rating: 7.5/10.

Miranda, Megan (2020) The Girl from Widow Hills. Simon & Schuster. On the twentieth anniversary of her childhood rescue from the drains of Widow Hills, Olivia Meyer is being watched. Olivia has escaped her “fame” and made a new life for herself, away from the public eye. As the anniversary draws near her paranoia increases and she begins sleepwalking again. Late one night she stumbles over a dead body in her yard. The corpse is a man she knows from her past and Olivia once more becomes the centre of the story. Kept me on the edge of my seat from the beginning. Creepy page-turner. Rating: 8.5/10.

Ward, Amanda Eyre (2020) The Jetsetters. Ballantine Books. Seventy-one-year-old widow Amanda Perkins seeks to win the Become a Jetsetter contest by submitting a sexy essay. When she wins the contest she takes her three estranged adult children on an all-expenses paid ten-day cruise around the sun-drenched Mediterranean. In an attempt at reconciliation these four wounded adults, whose lives have been shaped by a neglectful childhood, embrace the adventure whilst salving old wounds to find peace and love. Alongside the travelogue here is plenty of family dysfunction and angst.  Rating: 8/10.

Ivar, Katja (2020) Deep as Death. Bitter Lemon Press. In her second outing Finnish investigator Hella Mauzer is now back in Helsinki, fired from the police force, starting a career as a reluctant PI. When a prostitute is found floating in the harbour her old boss passes the homicide case onto her. Then another call-girl narrowly faces death by drowning. Her former colleague Police Inspector Mustonen sees this as an opportunity to advance his own career and runs interference.  Danger follows Hella’s every move as she edges closer to the killer. Hella is a smart and savvy hero caught up in the sexual politics of 1950s Helsinki. Not as fresh and captivating as Evil Things, but a solid mystery.  Rating: 8/10.